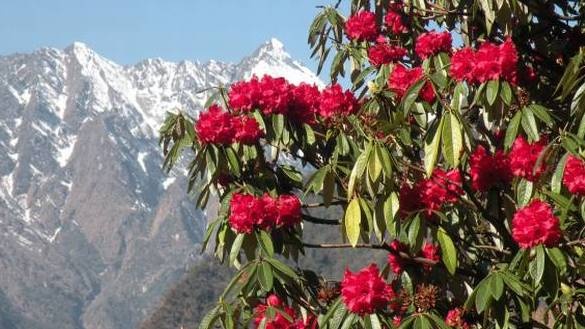 “The glittering leaves of the rhododendrons,

balance and vibrate in the cool air;

While in the sky above them,

white clouds chase each other.”

(Image – Buransh tree of Uttarakhand – Rhododendron Arboreum. Sriparna Saha is an architect in several sustainable, green and eco-friendly projects in the Uttarakhand Himalayan region. Landscape Architecture and Garden Design form a significant part of her projects. )

Rhododendron Arboreum (Buransh – बुरांस) is a dominant flowering tree species in the Himalayan region. In the early spring to summer (January – March), the flowers are found in full bloom on the high hills. Entire rhododendron forests in red is truly a sight to behold. It is a part and parcel of the culture and economy of the region and finds many uses in food, medicine, worship, utility tools. Poems and songs on Buransh is a part of the Himalayan folklore.

Rhododendron Buransh in the Himalayas

Nepal also has the Rhododendron Arboreum as its national flower. Nepal has more than 30 rhododendron species with a variety of sizes and colours (red, pink and white). During the blooming season, the hills and mountains of Nepal can be found in different colours, all because of the dominant colours of the rhododendron plant varieties. In Nepal, it is ‘gurans’ and ‘lali guransh’.

The tree also goes by the name of ‘Lal Brass.’

Rhododendron campanulatum (pink in colour) is the state flower of Himachal Pradesh.

While it is easy to spot buransh all across the Uttarakhand Himalayas, the Mussoorie-Buranskhanda-Dhanaulti-Kanatal road easily can be termed as Uttarakhand’s rhododendron car drive. In the rhododendron bloom season (February to April), this is truly a visual delight to be experienced.

It is common to see folks along with their children with buransh flowers (daily fresh pluck) on road sides. The excitement among the locals is definitely something that cannot be missed. It truly signifies the waning of the cold winter, shift from smaller days to longer days with more sunlight. And, a hint of the himalayan economy coming out of hibernation. No wonder that Uttarakhand’s state tree buransh is a popular catch phrase.

The genus Rhododendron consists of 1,024 species. These are woody and mostly evergreen. Some species are deciduous.  They belong to the Ericaceae plant family. Actually, the Azaleas which are popular in the gardens, are also a part of the Rhododendron genus. These are very popular for landscape planting in European and North American gardens.

Around 1,000 variants of the rhododendron tree have been created because of the beauty, popularity and multiple uses of this tree.

Rhododendron Arboreum is used in traditional Ayurvedic medicines  because of its  anti-oxidant, anti-diabetic and anti-inflammatory nature. In villages, sherbet, burnt sauce and chutney are prepared in homes from the Buransh flower. It is known to be good for the digestive system during the winters. Buransh drink is also considered to be beneficial for the people with cardiac problems. These have become popular among tourists as well.

Rhododendron Tea (Buransh Chai) is also quite popular. The petals of the rhododendron flower are added to the tea. This tea is a welcome drink in the Uttarakhand and Himachal Himalayan region. Buransh is sacred for the Sherpas and Tibetans.

The wood is used in making handles of agricultural machinery. Apart from that, its wood is mostly used for making plywood boxes, and in construction. In village homes, it is also burnt for cooking purposes and heating during the winters.

With so many uses, the Rhododendron Arboreum is an important part of the economy of the Himalayan region. Experts opine that because of climate change and global warming, early snowfalls in the season have resulted in early flowering of the rhododendron trees in the region. Also, because of the Covid-19 crisis, village folk who collect the rhododendron flowers for making juice and other items have not been able to do so.

Burans prefer sheltered areas which are partially shaded. Just a few hours of moderate sun is good for the plant. They need to be placed away from strong sun and winds. It also does well in acidic (pH 5-6), moist soils rich in humus. For soils with pH higher than 6, acidic fertilizers need to be used. It is also essential that the soil does not become water logged as the burans roots tend to rot. Again, the tree does not grow in rocky, sandy soils as they dry up quickly.

The roots which gather nutrients are mostly on the top soil. As a result, heat and drought conditions are quick to impact it adversely.

The plant propagates itself through seeds. Root grafting, stem grafting and veneer grafting are effective for getting quicker results. Moisture and a temperature range of 15-21 degree Celsius are favourable for the plant growth. Polyhouses and green houses can help control the moisture and temperature more effectively.

The Dhanaulti region’s economy is highly dependent on Buransh.  With so many uses and local entrepreneurs using it as their means of livelihood and its widespread use, the Buransh forests have thinned down considerably over the last few decades.

The Uttarakhand state government has initiated a Buransh(rhododendron) forest development at Buranskhanda near Dhanaulti, Mussoorie. This is part of the Thatyur block in Jaunpur region.

This initiative of afforestation of Buranskhanda was started by the Uttarakhand government in 2012. The plant needs specific conditions and care. A Buransh nursery was setup  with 6,000 plants. The conservation effort was increased to an area of 5 hectares. The initiative also got good support from Dhanaulti Eco park committee and local people. What we have today is the first Buransh jungle of Uttarakhand.

This is further expected to spur the economy of the region.

Buransh Mahotsav at Kausani – in the district of Almora – Uttarakhand is an annual event and is held in early spring. This indian rhododendron festival promotes the spirit of Uttarakhand, Himalayas and the concept of responsible tourism. This event celebrates the Buransh tree and highlights its many uses. Its popularity and positive contribution to the Himalayan economy qualifies it as an appropriate symbol of the rich biodiversity and forest wealth of the Uttarakhand Himalayan region.

My Homestay Architecture Blog : Pahadi Ghar Homestays; My Home Renovation Blog : A Case of Home Renovation and Remodeling ; My Travel Blogs : My trips to the Himalayas – Uttarakhand Glacier Burst – My earlier travel blogs

Sriparna Saha is an architect located at Dehradun, Uttarakhand.

She strongly believes that a landscape architect can create sustainable landscapes only if she has an in-depth knowledge of the local plants.

And, this knowledge has to go far beyond the biology and into understanding how it is intertwined with the livelihood and the culture of the people.

In her involvement as an architect in Himalayan projects, Sriparna realised the deep connection that the Himalayan people have with the Buransh tree. In fact, the flower, the leaves and various parts of the tree are a part of everyday existence of the people.